Ben recently spent a day shadowing Rachel in Leeds West. Here are his thoughts about the day. 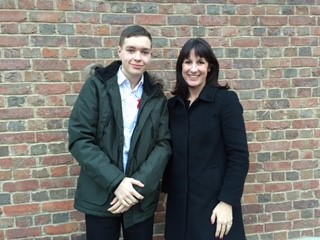 My day began with a brief tour of the office and learning how there are different jobs within an MP’s office. It was interesting to hear the difference in roles and the different tasks they entail. The job of handling constituency casework was one of the more thought-provoking roles in the office and sounded difficult, although at the same time also immensely rewarding.

The next part of my day was shadowing Rachel as she visited different places around Leeds West. The first school we went to was The Farnley Academy. We were introduced to the prefects and the School Executive who gave us a brief tour of the school building and allowed us to view some lessons. The School Executive also asked Rachel some questions regarding their local area and it was really positive to see how Rachel noted down their concerns to try to resolve them.

From Farnley we were whisked away to Leeds Civic Hall to an important meeting discussing the Armley Project. Living in Armley myself and having done so for all my life it was very good to see the local MP and different community groups attempting collectively to improve my local area. Having also gone to the All Together Armley meeting last month I was aware of the efforts to improve Armley Town Street in particular and it was great to see Rachel and the other representatives at the meeting showing as much passion behind the scenes as they did in the public meeting.

Being an MP is non-stop and there was no time to waste. The next school Rachel would be visiting was Beecroft Primary School in Kirkstall, and with the limited changeover time between the appointments lunch was just a quick bite in the car on the way there. When we arrived we were welcomed by the Headmistress and the receptionist and taken into their assembly where the school’s music group performed. Rachel was then introduced to the school and asked the children, who were fascinated as they had never met an MP in the flesh before, a few politics-related questions which the children answered enthusiastically. When asked who wanted to become an MP a majority of pupils raised their hand, Rachel had better watch out because it won’t be too many years until the pupils of Beecroft will be standing for election! This was one of my favourite parts of the day which showed me in practice that MPs represent everyone: from adults to high school students and even to primary school children. We then had a quick tour around the school’s new library and a quick chat with the Headmistress before it was time to go.

Before we knew it the clock struck 3 o’clock and it was time for Rachel to go back to London. Having seen a wide range of different roles an MP must be play in order to be successful and the great staff they have beside them it has only strengthened my dream of one day working in politics myself. It was a great opportunity to shadow Rachel throughout the day and it was a brilliant insight into a potential career option for me in the future. You never know – hopefully one day I will be showing a budding young politician around!

Ben was a pupil at Swallow Hill Community College until last year. He is currently studying A-Levels at Notre Dame College and he met Rachel at a recent Armley Community meeting.