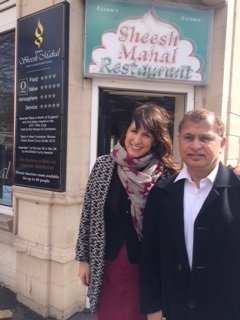 Rachel is thrilled to announce that she has nominated the Sheesh Mahal for the 2016 Tiffin Cup.

The Tiffin Cup is a national competition to find the best South Asian Restaurant in the country with the short-listed entrants invited to a special ‘cook-in’ at Bellamy’s Restaurant in London, where the overall winner will then be decided.

Last week Azram Chaudhry, the owner of Sheesh Mahal announced that the much anticipated re-build of his Restaurant had commenced following the devastation causing by the Boxing Day floods.

In 2011 the Sheesh Mahal was awarded the title of the best South Asian Restaurant in the North of England and Rachel hopes that even while rebuilding from the devastating floods, the Sheesh will be recognised again as an asset to the community -; and for its fantastic food!

Rachel would like to wish everyone at the Sheesh Mahal the best of luck, and we can’t wait for the winner to be announced.