I was delighted to attend the launch event for Leeds Young Labour yesterday. Hilary Benn and I spoke about the value of young people being involved in the Labour Party and the importance of campaigning especially with local elections round the corner and the EU referendum probably just a few months away. 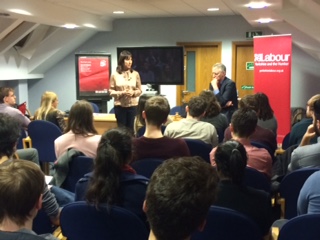 Young Labour is the Labour party’s national youth wing and is open to anyone who is a member of the party and aged 14-26. In order to win elections and get the Tories out of government, it is vital that we as a party engage with and involve the young people who want to learn more about politics and help make a difference.  Having active and welcoming Young Labour groups is a vitally important way of engaging with the young people who want to get involved. There were over 50 young labour members at the launch last night at the Unite union building in Leeds, it was great to see Cllr Judith Blake, Leader of Leeds city Council at the event. Many thanks to Cllr Alice Smart for organising.