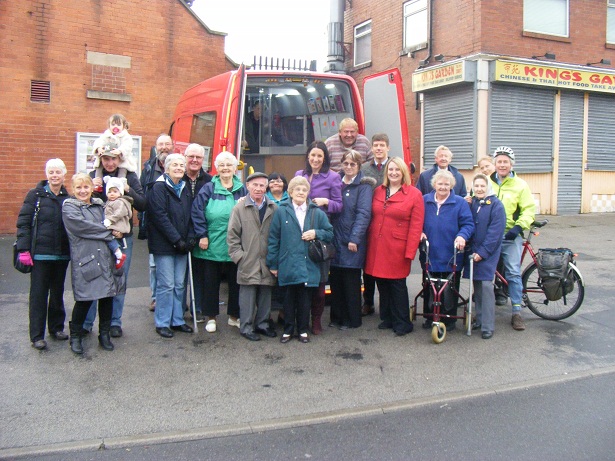 This is not the end of the campaign however, as she continues to work with the Post Office to find a permanent solution for the estate. Kirkstall Councillors Lucinda Yeadon and Bernard Atha, as well as Adrian Wales from the Post Office, were on the panel of speakers.

The meeting opened with loud cheers from local residents at the mention of the new Mobile Post Office Unit. Louder cheers soon followed when Adrian announced that he would hopefully be able to announce a permanent Post Office solution shortly.

There was an open forum where residents told the panel how things had gone in the first week of the Mobile Unit’s existence. Rachel, who had used the van earlier that day, said how “it is a great temporary solution, providing an essential accessible service for everybody, with a lift feature for disabled and elderly residents.” Workers at the Hawksworth Wood Community Centre said how they had ‘used the banking service everyday… it is fantastic!’ Some residents commented how at first they were unsure about the van, but once they tried it they realised how good it was. The next step of the Post Office campaign will be the announcement of a permanent service to the Hawksworth Wood Estate.

The Mobile Unit is located outside the Co-op, and is there Monday-Friday from 10am-3pm.