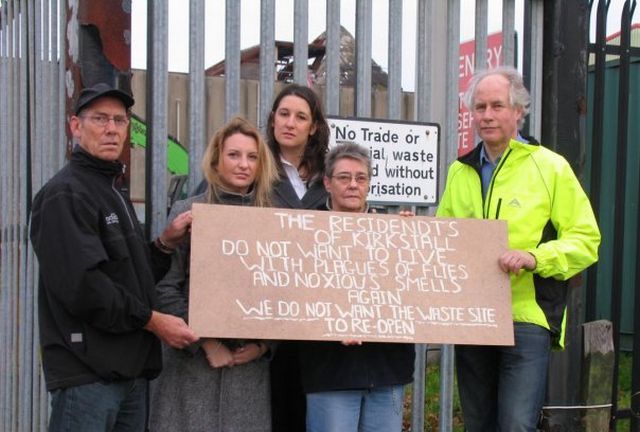 Leeds’ Lib-Dem/Tory City Council has axed its plans to build a Waste Transfer site in the heart of Kirkstall, and local residents have reacted with delight.

Rachel protested strongly against the plans, alongside local Labour Councillors and local residents, which would have seen 100,000 tonnes of waste handled next to shops, houses, restaurants and Leeds’ busiest road. The campaign created a front page splash in the Yorkshire Evening Post and went online with a video filmed at Kirkstall Valley Primary School of children wearing gas masks in protest.

She told the Yorkshire Evening Post that the Council ‘caved in because they have seen the reaction of the local community. They should have spoken to the community at the start instead of going through an expensive tendering process that was a waste of taxpayers’ money.’

The Lib-Dem/Tory Council have said the decision is due to the potential cost of the site: something they should have known all along.

The decision raises serious questions about the Council’s approach to the project. The original idea to use the Evanston Avenue site completely ignored the surroundings. With four schools within a mile, thousands of houses nearby, restaurants and shops next door, AND with Leeds’ busiest road running alongside, it was obvious that the site was wrong. Now it turns out that it would have been too expensive as well!

Kirkstall and Burley can breathe easy again: the Waste Not Wanted campaign has finally got through!

Although this battle has been won, the campaign is not fully over. There still stands a shell of the old transfer station, still processing some waste. The Council must take steps to turn the household recycling centre into a modern facility, and get rid of the burnt down eyesore.

Thank you to everyone who helped make the Council finally see sense!