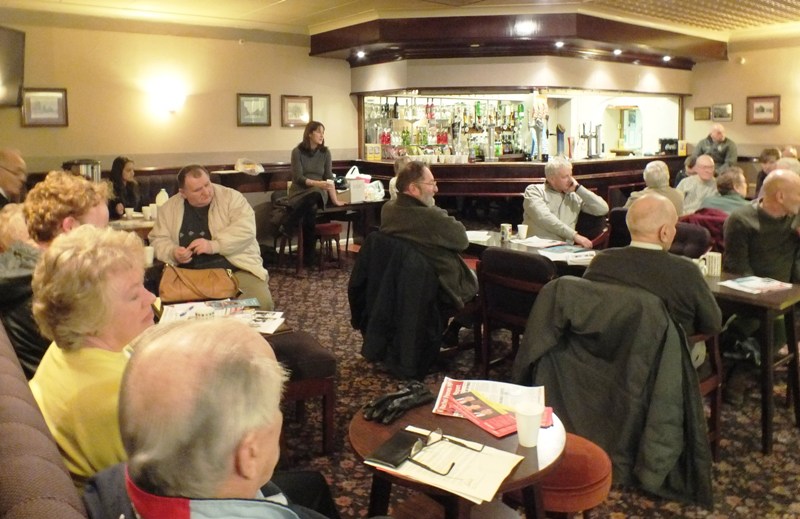 On Friday Rachel hosted a ‘coffee evening’ at the Bramley Villagers Social Club to discuss the rising cost of living. The meeting was well attended by local people, who were keen to share their views.

Rachel opened the meeting by mentioning some of the recurrent issues constituents are discussing at her surgeries -; problems with benefits, low wages and increasing utility costs. Attendees were then invited to share their own concerns and a wide range of problems were discussed.

The first issue raised was the unfairness of ATOS assessments for those claiming disability benefits, and the lack of support available for those going through the application and appeals process. There was concern that individuals are getting into debt and ending up using unscrupulous ‘pay-day’ lenders because they are unable to access the right benefits.

The next issue raised was to do with the upcoming changes to Housing Benefit, more commonly known as the Bedroom Tax. Many in the room were shocked to hear that the tax would affect foster children, which a foster carer brought up on behalf of those who would be affected. As foster children are not classed as part of a household for benefit purposes the changes mean foster children will not be regarded as requiring a bedroom and carers will end up paying for the “extra” room, which is actually in use. There are some 600 foster carers in Leeds and the changes will undoubtedly affect many of them. Rachel expressed concern that the changes could discourage people from fostering children, when foster carers are already in short demand.

The changes will also affect families who have a ‘spare’ bedroom and have a child serving overseas in the armed forces, parents who have partial custody of their children, those with an illness or a disability who may require an extra bedroom for recovery or equipment.

Further issues raised included the lack of British manufacturing, which could create more jobs, especially for young people, and the costs of paying for residential care – attendees were not reassured by the recent £75,000 cap on social care costs.

Attendees then discussed issues in more detail with those on their table, with Rachel moving around each group to join in each conversation. Groups then reported back two main issues each to the main meeting which included:

-Youth unemployment: the meeting felt there were not enough job opportunities for young people and felt there should be more apprenticeships available. Concerns were also raised regarding the rising costs of university and lack of graduate jobs.

-Improving local public transport by having an integrated system.

-“The rich are getting richer, the poor are getting poorer”. Discussion of proposed Mansion Tax and reintroduction of 10p tax band.

-Poverty trap. Demonisation of the working-class.

-Lack of affordable housing and lack of help to get new buyers on property ladder.