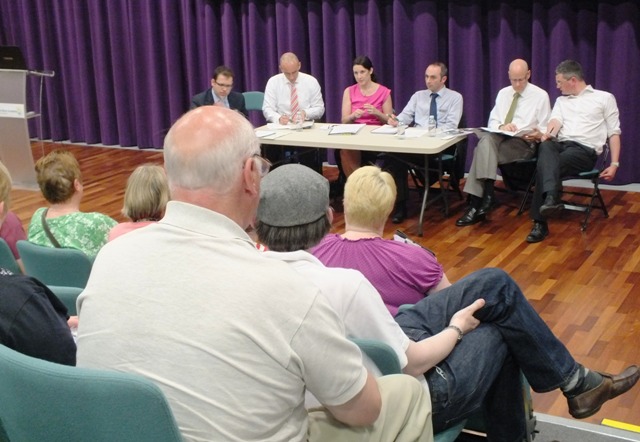 Last night Rachel hosted a public meeting on bus services at Leeds West Academy in Rodley. She was joined on the panel by representatives from First Bus, including Regional Managing Director Dave Alexander and Ben Gilligan Operations Director, Neale Wallace, Bus Services Manager at Metro and Cllr James Lewis, Chair of West Yorkshire Integrated Transport Authority. Several local people attended, many from the Rodley area, and debate was lively as people put their complaints to, and shared their poor experiences directly with, First.

Rachel opened the meeting by briefly speaking about the number of people who have contacted her regarding bus services and how she is determined that improvements are made to local services, naming the issue as a main priority. Neale Wallace from Metro and Cllr James Lewis then spoke about Metro’s role and vision for an integrated transport system. Metro are currently in discussions with bus operators regarding partnerships and the crunch meeting on this issue will take place in June where it will be decided if the Quality Bus Contracts scheme, which would take control of fares and routes away from private companies and give it to Metro, will be given the go ahead.

There were a great many complaints regarding the lack of services through Rodley, and issue that Rachel has campaigned on since 2010, with people describing themselves as effectively “stranded” in Rodley for a large portion of the day and others remarking that they felt “cut off” because they were not considered “profitable”. The lack of service has left many with no access to GPs surgeries, chemists, banks, Post Offices and other facilities that are not available in Rodley. Other people described the difficulties of getting to work in places like Armley, commenting that people were “forced into cars” because there is no bus service to accommodate them. There were calls to reinstate the 16a service through Rodley.

There were several complaints that the 16 service is currently unreliable, with people waiting a long time when the service is scheduled to be every 10 minutes or less and that it takes too long to get from the Farsley/Bramley area to Leeds City Centre. One attendee suggested that there should be a train station in Stanningley for commuters.

Outside of the Rodley area complaints were raised regarding the unreliability of the 49, 50/50a, 67, 42, 508, 670, 671, 91, 4 and 5 services. Some attendees described experiences of poor customer service from drivers including obscene language, rudeness and questioning of disability passes. It was suggested that First and Metro could both utilise online social media more as part of their customer service and First encouraged people to engage via their Twitter account @FirstWYorks_bus

Many other issues were raised including the possibility of reintroducing some late night services to the West Leeds area, the lack of wheelchair and pushchair space on some buses, poor condition of buses, poor seating in bus shelters, issues with real-time information and the withdrawal of the 67 service.

Dave Alexander from First agreed that some buses were in bad condition and that new buses would come into use in September to replace some of these under an investment programme. He said there were a number of complex problems that caused unreliability and that traffic congestion is a big issue.

Ben Gilligan agreed that customer services needed improving as soon as possible and assured the audience that this would be looked into with regards to staff training.

First remarked that some of the comments were “quite humbling” and agreed that they would look into the issues raised and provide feedback and proposals. Rachel suggested that First undertake a survey of people in Rodley to ensure that their needs are heard and asked that First give a timescale for their proposals. First said they would aim to provide this within a month.

Cllr James Lewis made some closing remarks saying that the Council need to ensure that they continue to get to grips with the Highways network to ease problems of congestion, which would help improve some of the service issues, and emphasised the need for local routes and connections to be given priority, not just main routes.

Rachel felt that the meeting was a success commenting,

‘The audience and First really seemed to be engaged and I was pleased that local people got the opportunity to share their complaints face to face with First management and that First and Metro were able to provide direct feedback and information.

I’d like to thank all those who attended and contributed to this meeting and will be keeping everyone up to date with progress. I hope that we will see some real improvements in the next few months’

Many thanks to Leeds West Academy for hosting.